Like us, you may have choked on your cup of tea when you heard Donald Trump advisor Kellyanne Conway use the phrase ‘alternative facts’ during a recent television interview. You might also have shouted at the television a little bit.

Being interviewed is hard and there’s a chance that Conway’s tongue slipped as she spent four minutes trying to wriggle out of answering the question. But coming, as it does, in the wake of other phrases, such as ‘post-truth’ and ‘alt-right’, it’s hard not to see it as another attempt to bend language to the needs of a president desperate to impose his worldview.

We all use language for our own purposes: my ‘debate’ might be your ‘rant’. But, as the late novelist and journalist Angela Carter once wrote: “Language is power, life and the instrument of culture, the instrument of domination and liberation.” One can only imagine what this passionate feminist would have had to say about America’s 45thpresident. 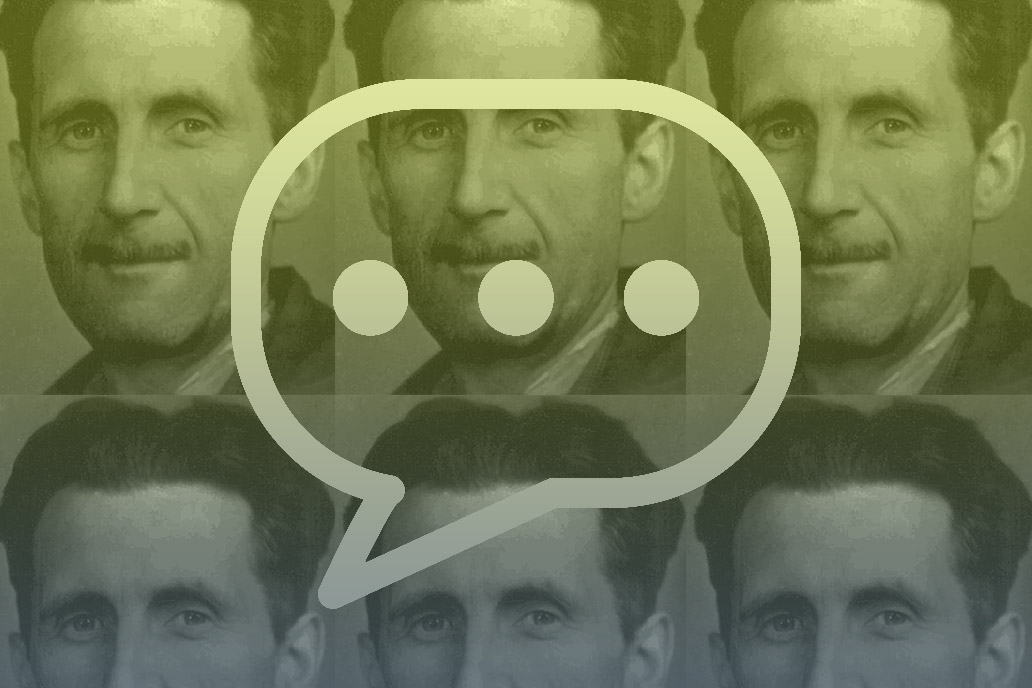 Of course, George Orwell literally wrote the book on language as a form of control and it is certainly no coincidence that1984finds itself amongst the top selling books onamazon.comright now. As a BBC journalist working on propaganda during the Second World War, Orwell knew what he was on about. He even wrote a pamphlet on the subject, calledPolitics and the English Language. In it, he describes language as becoming “ugly and inaccurate because our thoughts are foolish, but the slovenliness of our language makes it easier for us to have foolish thoughts.”

He went on: “Modern English, especially written English, is full of bad habits which spread by imitation and which can be avoided if one is willing to take the necessary trouble.”

In this age of Twitter, taking that trouble can seem like awfully hard work. We may consider ourselves reasonable human beings who like to call a spade a spade, or a lie a lie, but sometimes isn’t it just easier to go with the flow?

But, it is this lethargy that can make language so insidious. Hardly a newspaper article on politics goes by now without an appearance from the phrase ‘post-truth’. According to Oxford Dictionaries, which named post-truth its 2016 word of the year, the phrase has been around for the past decade. But the prefix ‘post’, from the Latin ‘after’ or ‘behind’, suggests that there were was a ‘before’ – as though there was ever a time when politicians and the press were beyond reproach. And in repeating it we run the risk of legitimatising what is a deliberately opaque phrase. It is, as Orwell says, spreading ‘by imitation’.

The New York Times picked up on this in January when it ran a headline that said ‘Meeting With Top Lawmakers, Trump Repeats an Election Lie’. The following day, it explained why it specifically used the ‘L’ word. It is the sort of word that makes no bones about its intent. But like other powerful words, it must, according to the Times, be used carefully, so as not to dilute its power.

What’s particularly interesting about Trump is that while his speeches and tweets often go off-piste, the language that he uses seems very clear: this is bad, that is dishonest, this is gonna be great. Is it coincidence that all this blew up in the same year that the UK’s former education minister Michael Gove told everyone that the country had had enough of ‘experts’? Those experts do have a tendency to use long words.

Love him or loathe him, Gove may have had a point, if not the one that everyone thought he was making. What many people have had enough of is complexity – political, banking, industrial, even journalistic systems that they don’t understand and, therefore, don’t entirely trust.

And when news is as driven by the need for audience numbers as the latest US comedy show, the relationship between the press and politicians becomes a game. Our politicians are media trained to within an inch of their life, meaning it is rare to hear a straight answer to a question. Both have a job to do and neither is likely to veer off track.

This isn’t a new phenomenon – in 1997 BBC journalist Jeremy Paxman famously asked the former Conservative Home Secretary Michael Howard the same question 12 times in a row. A year later, Bill Clinton pulled off one of the most famous linguistic side-steps when he declared he hadn’t had ‘sexual relations’ with Monica Lewinsky.

If Trump has had media training, then he is choosing to ignore it and it is perhaps the straightforward nature of his language in the face of such complexity that appeals to his supporters – after all, most of us like to think that we know what bad and good look like. In 1984, Orwell’s newspeak removes even this nuance, with the word ‘bad’ replaced with ‘ungood’.

It is in the very simplicity of Trump’s words that the challenge lies. They challenge you to disagree. They say, ‘I don’t need proof when it’s so obvious. Didn’t you just hear me say it was obvious?’ They put the onus on us to go and find the evidence. What’s more, as The New York Times piece points out, he uses an awful lot of them. So Trump’s language may be disarming in its plainness, but it is still like trying to see a white dog in snow. It’s worth taking a look at a transcript of one of his speeches or even an answer to a reporter’s question to see what I mean.

So what has all this to do with a digital marketing agency? We all use words to convey messages, either as individuals or businesses. If Orwell shows us anything, it is that none of this is new and that our public and private institutions and our businesses all have a role to play.

Look at the way in which business language has evolved. We have turned nouns into verbs – ‘I’ll diarise that’, or ‘I’ll message you’. We no longer talk about ‘hiring’ people, we ‘onboard’ them. We don’t ‘train’ them, we ‘upskill’ them. And we no longer actually have ‘people’ working for us, but ‘talent’.

Some of these words may have come from good intentions - ‘I’ll diarise that’ certainly knocks milliseconds off a conversation – but most of the time these words are woolly (not to mention downright irritating). The key is clarity. The clearer the image that you can create in your reader’s mind, the more likely they are to understand your meaning.

In our world of digital, it’s just as bad. We talk about content solutions and digital journeys. When we set up Digital Potion, we made a conscious decision to avoid using industry jargon as much as possible when talking to our clients. We take the same approach when writing copy for them. Jargon can be useful in everyday conversation with someone who knows what you’re talking about, but for everyone else, it’s just a barrier.

Great writing is about balance. If you only use short sentences and words, your writing quickly becomes dull. If you only use complicated, Latinate phrases, you run the risk of confusing your reader. And, as already argued even simple language in long, rambling sentences is not as clear as it first seems. Whichever is why it’s worth thinking about clarity and asking yourself three questions:

Take the first question: if I say ‘think of an animal’, what pops into your head? A dog, perhaps? Excellent, because I actually meant dog. But what if my dog is a Yorkshire terrier and you’re thinking about a German Shepherd? You got some of my meaning but not necessarily all of it. This is why the first question is so important. Clear images transform your writing and improve the chances of your message being received – and more importantly – understood.

You’d be surprised how often the answer to the second question is ‘no’. If the person writing the piece doesn’t understand, then the reader has no hope. You can usually spot a writer who hasn’t fully understood their subject matter – most likely they’ve fallen back on the jargon. In those instances, the writer needs to go back, ask more questions, ask for more clarity.

The third question is the sanity check – you’re really asking yourself whether you’ve made assumptions in your choice of language. By looking at your writing through someone else’s eyes you start to see it as your reader does.

This isn’t about dumbing down. By choosing to avoid jargon and woolly language you’re not patronising your experts, you’re simply making sure that your message is as clear as possible to as wide an audience as possible. And, after all, who doesn’t want that?

Orwell’s Politics and the English Language is available to read online at theorwellprize.co.uk and includes his - still relevant – six rules for clear writing.

It’s good practice to refresh your website every few years to keep it up to date with changes in digital technology and design. this is how we rebuilt David Duggan

We’re thrilled to announce that a book commemorating the centenary of Armistice, which our editorial director Lisa helped create, has picked up a prestigious Drum Design Award.

Marketing to Baby Boomers - Baby boomers are the wealthiest generation in human history. But while they control more than 90% of the world’s wealth, both privately and corporately, they remain one of the most difficult to convert from browser to buyer.

Although websites that use WordPress seem more cost effective, they may no longer be such a great option. We analyse the page loading speeds of a WordPress website and compare it to a bespoke build.